Late last summer, Roz Llewellyn, the Community Recreation Coordinator for the township of Oro-Medonte, was faced with a dilemma.

Oro-Medonte, a community of more than 21,000 located about an hour’s drive north of Toronto, was preparing to reopen its arena and banquet hall facility after being closed over the spring due to the COVID-19 pandemic and, as is usual, through the hot summer months. The problem Llewellyn and her colleagues faced was how to reopen safely and still accommodate the maximum number of players and teams allowed under the province’s pandemic rules for indoor gatherings.

The horn of the dilemma was that while the province had set a cap of 50 people in the arena, the facility’s dressing rooms could each only accommodate six players at a time in a manner that would allow for social distancing. That meant each team would need more than one room.

The upshot? In order to ensure everyone’s safety, the number of teams permitted to use the facility would have to be severely curtailed. That didn’t sit well with Llewellyn. She didn’t want to have to tell players and teams, some of whom had used the facility for years, that they would have to make other arrangements for ice time.

“So, I said, ‘Okay, well how can we get creative and repurpose some of the space that we have?’”

Llewellyn had heard how Trusscore solved a problem for Waterloo Region hospitals at the outset of the pandemic with a donation of antimicrobial coated, free standing temporary walls called TempWall by Trusscore, panels that allowed the hospitals to quickly reconfigure their existing spaces in order to control infection.

TempWall by Trusscore is a modular wall system of moveable panels that is easy to install, easy to re-configure and easy to take down. It’s a fast and flexible way to reconfigure an existing space into temporary spaces. It was perfect for Oro-Medonte’s arena needs.

The township ordered 28 TempWall by Trusscore panels, and after they arrived, arena staff set about quickly converting the facility’s lobby area into two makeshift dressing areas for players, as well as using panels to help redirect the flow of people.

“We opened on Oct. 5, so we’ve been open for about a month, now,” said Llewellyn. “We've had great feedback from our users coming into the building. They say it's really well laid out, it's easy to follow, there's plenty of signage.”

And plenty of hockey players and teams getting ice time. 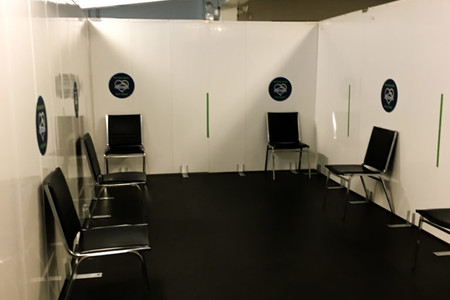 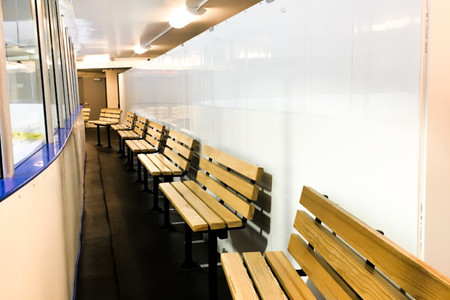 Llewellyn said the assembly and installation of the TempWall panels was “super easy.

“It didn't take very long to set up at all. Our facilities staff went at it gung ho. It’s really just like putting puzzle pieces together: You just slide [the panels] together and pop the feet on and then put the brackets on the top."

“So, in terms of ease of installation, if you can do a puzzle, you know how to put together these temporary walls.”

Llewellyn said the arena had considered using drapes or curtains as a kind of mobile dividing wall, and to reconfigure their spaces, but her concern was that curtains would be difficult to clean.

“Trusscore is so easy to clean, and that is really a benefit for our staff.”

The Technology Behind the TempWalls

TempWall panels are treated with an antimicrobial coating, a surface treatment that molecularly bonds to the surface of the product, making it inhospitable to germs.

Llewellyn said another feature of Trusscore’s mobile wall panels that impressed the township was their suitability for being repurposed down the road. When the hoped-for day arrives that the pandemic is in the past, the panels, she says, can be reconfigured as polling booths for the next election and as temporary office cubicles. Functionality can be further increased by installing castors to the feet that are supplied with the panels, creating what amounts to a freestanding wall on wheels.

But for now, thanks to Trusscore, with portable temporary walls now in place, it’s time to lace up the skates. In Oro-Medonte, as Stompin’ Tom once crooned, it’s time for the good ol’ hockey game.